International Association for the Defense of Religious Liberty Convenes in Geneva 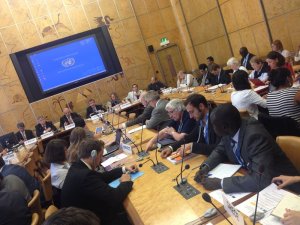 The Adventist News Network (ANN) reports that on June 10, the International Association for the Defense of Religious Liberty (AIDLR) “co-sponsored a panel discussion on the sidelines of the 26th session of the UN Human Rights Council.”

The Adventist-affiliated group AIDLR got a welcomed boost in visibility this month by organizing its first event at the United Nations office in Geneva, organizers said.

Panelists at the June 10 event, titled “Worldwide Human Rights, Religious Liberty and Religious Minorities,” cautioned that religious freedoms risked being curbed if efforts weren’t made to better coordinate the work of the UN, European Union and other entities that have various approaches to human rights. (Complete article, 24 June 2014).

In addition to the panel discussion, AIDLR released a book during the gathering. The Religion and Law Consortium shares:

The special edition of AIDLR’s “Conscience and Liberty” entitled “Worldwide Human Rights and Religious Liberty. A New Equilibrium or New Challenges Volume I” was launched with some of the authors presenting their contributions. The book contains articles, statements and reflection of four UN Secretaries-General, UN High Commissioners of Human Rights, ambassadors, scholars, religious leaders as well as testimonies or letters of former presidents of the Honorary  Committee of AIDLR including Eleanor Roosevelt, Rene Cassin, Leopold Sedar Senghor, and Mary Robinson. (UN Side Event, 10 June 2014)