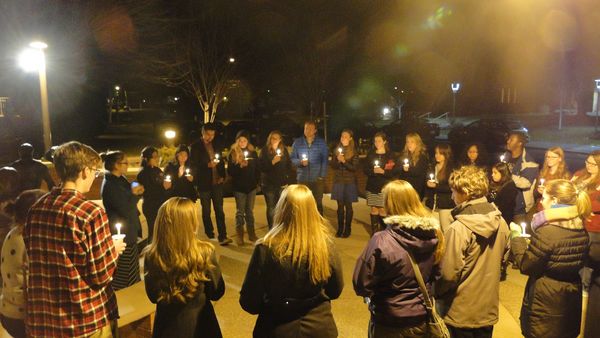 Walla Walla University’s fifth annual Peacemaking Weekend, which this year coincided with the APF-led first annual Adventist Peace Education Week, focused on racial justice and injustice in the light of recent events in Ferguson, New York, and throughout the country.

The weekend events, which took place January 16 and 17, were held just before the national holiday celebrating the life of Dr. Martin Luther King Jr. to honor King’s commitment to peaceful struggle for racial equality, elimination of poverty, nonviolence and social justice. Recent clashes between police and protestors in the United States highlight the need for ongoing work to realize Dr. King’s dream of a more just society.

Adventist Peace Education Week at Walla Walla included a Friday night candlelight vigil outside the University Church immediately following the vespers program. The vigil was organized by Walla Walla University’s Amnesty International Club. Nearly 50 students, faculty, staff, and community members gathered to honor lives lost in recent clashes, both police and civilians alike, by lighting candles. After a reading from Matthew 5:3-12 and a prayer, participants marched with candles around the perimeter of the campus, singing songs.

The candlelight vigil and peacemaking march ended at the Student Activities Center where over 50 students engaged in a debate on the incidents in Ferguson. Students were divided into three groups to represent either police, Michael Brown, or the peacemakers, and were given 15 minutes to prepare in their group for the debate. The debate was held in three rounds with three judges (two students and one professor) evaluating the presentation by each group. The group representing the police was deemed the winner, presenting the most compelling argument from the position of authority.

Saturday morning featured a panel discussion on the topic “Race and Peacemaking: Authority, Responsibility, and Justice.” Panel participants included Pastor Terrance Taylor, an Adventist pastor from a neighboring city who attended Walla Walla University and has experienced racial profiling and encounters with police officers; Chris Current, associate professor of social work and sociology at Walla Walla University whose research has studied minority and immigrant populations and work as an ally; and Henning Guldhammer, executive pastor of the Walla Walla University Church.

The panel was moderated by Terrie Aamodt, professor of history at Walla Walla University with a background in African American studies, and discussed the role of authority in peacemaking, the responsibility of all members of a community in promoting and achieving peace, and the definition and implementation justice in peacemaking as it relates to race, both historically and today.

The Walla Walla University Peacemaking Weekend Committee and the Office of Diversity are already beginning preparations for next year’s Adventist Peace Education Week, with a commitment to promoting peaceful discourse in the Walla Walla Valley.

← Remembering the Radical Politics of the Pioneers: John Byington (by Brian Strayer)
Peace and Justice are at the heart of Advent Hope’s church life in New York City (by Jacqueline Murekatete) →